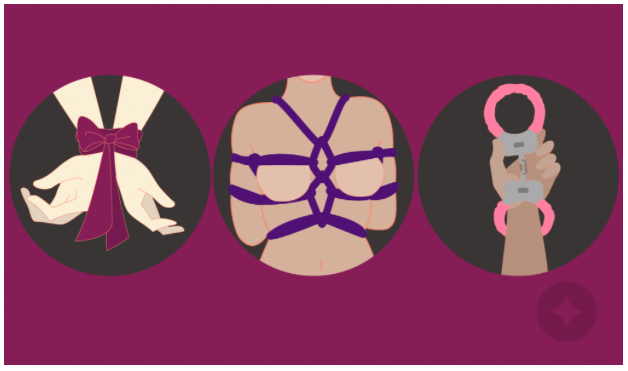 But depending on what sort of kinky folks you speak to, this sort of outrageous fantasy could be right on the money, or so far from the truth that your kink-friendly conversation partner bursts into laughter.

When couples’ practice active consent, it means they never attempt a sexual act without asking first, and they listen closely to their partner during sex just in case something that usually feels good happens to feel bad.

Bondage can range from a loosely-wrapped tie around the wrists to those gorgeously intricate Shibari rope designs that you might have seen on the internet.

If you’re new to bondage, start simple with silk ties, easy-release handcuffs, or super-soft rope. If you’re both dying for more and want to make art with your rope work, get in touch with a professional rigger — a person who has had years of experience in safely tying and binding with a working knowledge of how anatomy plays into the whole thing.

If done incorrectly, super tight or otherwise body-bending bondage can cause serious injury and long-term nerve damage. We recommend staying away from the rougher stuff until you really know what you’re doing and have been supervised by a pro.

WHAT IS DOMINATION & SUBMISSION?

As you might have guessed, someone who identifies as a sexual dominant – referred to as a Dom with a capital D in vernacular – likes to be the person in charge in the bedroom.

The S stands for Submission, and unsurprisingly still, these folks like to be on the receiving end of domination. Some submissives – also called “subs” for short – simply like a partner that enjoys being on top or tying their hands to the bedposts.

Others need something more extreme to get off, like engaging in breath play or being bent over and spanked. Dominants can be just as expansive in their play preferences, and their favorite sex acts can range from using a sex toy on their partner while they writhe in ecstatic orgasm, or tightly cuffing their wrists and ankles and screwing them silly.

What is Sadism & Masochism?

Now here’s where you might assume things get scary, but again, remember that nothing bad can happen when you play with a partner who listens to your needs and care about your well-being.

A sadist – usually the dominant partner – feels sexually turned on by watching their partner squirm and wriggle from the metallic bite of a Whartenberg wheel or the crack of a paddle.

A masochist – played by the submissive – gets off by having those sorts of intense acts done to them.

Impact play can be dialed down or turned up depending on what feels good. There’s a reason that spanking feel good, besides making you feel like a naughty school kid. When you smack or spank any part of your body, whether lightly or with force, blood rises to the skin’s surface, which then intensifies any sort of touch applied afterwards.